Eimear O'Casey is your Parliamentary Candidate for West Ham 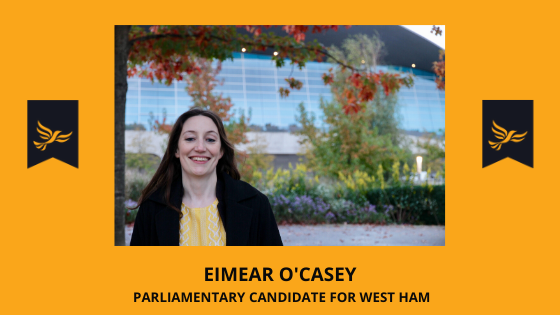 Eimear O’Casey has lived in East London for six years. Eimear is a magistrate (justice of the peace) in the area, sitting at courts in Stratford and Bow and is a passionate advocate for progressive criminal justice reform. She is particularly aware of the dangerous and increasing knife crime in the area, and would push for a holistic public health and educational approach to stop our youth carrying knives.  Experience in the magistrate's court has made Eimear extremely conscious of the devastation that violence and knife crime can cause to all those touched by it.

In her day job, Eimear is an analyst on the former Soviet Union for a political risk consultancy. She advises organisations and companies operating in this region and has a specific interest in tackling bribery and corruption. Eimear also seeks to promote democracy and good governance outside the UK, and volunteers as an election observer across Eurasia.

Eimear has been a Liberal Democrat for nearly a decade, but like many it was Brexit that turned her into a campaigner. She also chairs the East London branch of the People’s Vote campaign group, engaging with constituents to give the population a chance to have a Final Say, and Stop Brexit.

Eimear is honoured to be standing in a constituency as diverse and dynamic as West Ham.

But she also realises the multiple problems facing the area, and as your MP would fight hard to take action where incumbents have been complacent. This includes: