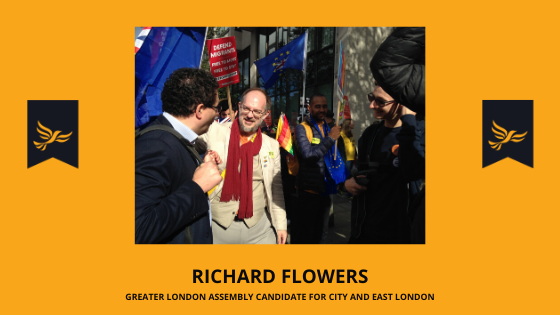 "I am standing to give people the chance to vote for a different kind of Britain. A Britain of Freedom, without fear of hate crimes and bigotry; a Britain of Fairness, where your voice can be heard; a Britain that looks to the Future, in hope, and friendship and is part of a wider world with all the opportunities that that offers."

Richard Flowers has lived in East London with his husband Alex for over 25 years. They were able to marry thanks to Liberal Democrats in government and they recently celebrated their fifth wedding anniversary.

Richard believes that Liberal Democrat values are London values: welcoming, innovative, creative, looking to a freer fairer future. The diverse communities who live here are a benefit to London and Britain, and we need to work together, and with our friends across the country, and in Europe, and the rest of the world, to fight global challenges like the climate crisis.

Speaking at the City & East Campaign launch in September, he said:

"London has a terrific opportunity - London is a liberal city with liberal values. We have a real chance to build on the European elections - where the Lib Dems won in London - and see Siobhan Benita become our first Liberal Democrat Mayor. I fully support her pledge to build a kinder London and look forward to campaigning with her and working with her on the GLA."

Richard’s campaign aims are to bring a fresh Liberal voice to East London, to celebrate diversity and champion opportunity. His priorities are cleaning up our air so we can live our lives more freely; to support Siobhan Benita’s plans to work for young people, by building opportunities and defeating the scourge of knife crime; to press for new homes that are priced so people can live, and social housing that is fit for all our communities; and of course to stop Brexit.

Richard works as an accountant for an international company, and has had to prepare for the impact of Brexit twice so far now. He has seen the affect that the uncertainty over their rights has placed on his many European colleagues.